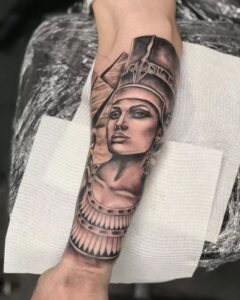 If you are looking for Pharaoh Tattoo designs, then you are in the right place, check out our 15+ models. Those designs are up-to-date and made for 2021 and because of that, you in the right place. If you liked our list, then make sure you share it around.

While the Pharaohs might not be around anymore for over 2000 years, it does not mean that they are no longer relevant to many people. We will be discussing some of the most commonly used meanings of the pharaohs’ tattoos.

The Pharaoh symbolizes royalty from Ancient Egypt. And let’s not lie, it looks pretty cool. You can have this tattoo inked on any part of your body. The meaning of the tattoo will depend on who is wearing it. However, the pharaoh tattoo can have a lot of meanings. We will get to that.

We’ll be talking about the history and meanings of the image in this post. We will also examine the symbolism behind the image and what it means for people who have it tattooed. If you look closely, you’ll see many different types of the tattoo of the Pharaoh. We’ll discuss these variations and discuss if they can mean something different depending on how the image is depicted. We hope you have gained more knowledge about the Pharaoh by the end of this post.

Why get a pharaoh tattoo?

First, the usages of the name “Pharaoh” were not used until approximately 1200 BC. It’s the Greek translation of the Egyptian word ‘pero. This was a term that meant royalty. Before 1200 BC, Egypt’s leaders used the term kings.

You had to train hard to become a great pharaoh. It wasn’t easy to become the Pharaoh. This is why you had to start training early in your life. The journey to becoming the leader of Egypt required children to learn specific lessons. As the Pharaoh frequently led his army in battle, much of the training required fighting skills and physical strength. He also had to be able to support his soldiers. They learned how to ride horses, hunt, fish for food, and train them. These young princes aimed to get the Pharaoh under their wing to be the co-regent and assume the deceased Pharaoh’s duties.

There were many sacrifices and offerings made in Ancient Egypt to the gods, as you may know. These offerings were only made possible by the Pharaoh. He also had to undergo all the physical training required to be a high priest. Only priests and monarchs were permitted in buildings that contained the statues for the gods and spirits.

Contrary to the way most countries are run, the Pharaoh had absolute and complete power. He was responsible for deciding taxes, trade, industry, law and order, and all other important decisions for the country.

For their appearance, the images of the pharaohs always include a beard. However, Ancient Egypt’s men were usually clean-shaven. Pharaohs were known to have fake beards as the beard was believed to bring them closer to the gods. They were also shown as being young and handsome when they were, in fact, fat and old.

What’s the meaning of a pharaoh tattoo?

Before discussing the meanings of the pharaoh tattoo, we need to understand why these tattoos remain so popular. The pharaohs have been the subject of many popular Egyptian paintings and other art. These images are stunning, so it is not surprising that people who want cool tattoo designs choose to get one of the many variations of the Pharaoh.

Pharaohs were the rulers of the land back in the past. That is why power is the most common meaning for the tattoo pharaoh. While pharaoh tattoos can be interpreted as power, it doesn’t mean that the person who has them is the most powerful. People often get the tattoo because they feel empowered to pursue the life they desire. People who are in power will often get the pharaoh tat.

Someone might want to portray themselves as royalty or someone of royal descent by getting a tattoo that depicts a pharaoh. As the Egyptian Empire was as rich as its subjects, pharaohs were considered royals. So don’t be surprised when the person is sporting the Pharaoh that sees them as an extremely powerful individual.

People will often get the pharaoh ink to show leadership, as Pharaohs were prominent leaders of their day. They could use it to display their leadership qualities, such as being the leaders in their families or at work.

Given that the Egyptian pharaohs were once considered “gods upon the earth,” one of the meanings of the Pharaoh’s tattoo meanings is exactly that. Do not be surprised if this tattoo owner is highly self-confident. This is not necessarily bad. It just shows that they are confident.

Check out other tattoo’s choosen by our team. 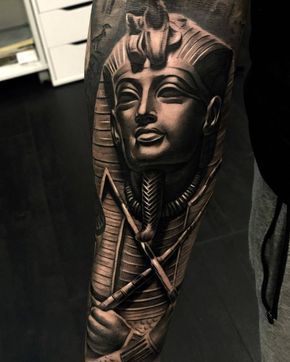